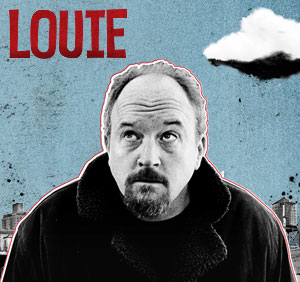 If you have never experienced the genius of Louis CK, I will only accept the legitimate excuse of no cable or being under the age of 17, as any younger is inappropriate.

I vividly remember the first time Louis came into my vernacular, when a few of my coworkers back in Texas were discussing how they bought tickets to his show directly from his website [see here his brilliancy], and I used context clues to deduce that they were talking about a rapper. Usually a normal name + weird initials = rapper, amiright?

I did not learn of his actual talents until that summer, when I was dating JB and ended up in the game room of his parents house late at night when we were trying to not sneak in each others bedrooms. I was fascinated and enthralled by his comedy and it was a welcome distraction to our almost-married-but-not-quite selves. Even though I should have been offended by his crudeness, his honesty and raw, human nature made me forget that F-words were bad. Plus the way he treats his kids (I know it’s fictional, but based on real life, right?) is endearing and wonderful.

I was rather devastated when I ran out of episodes to watch on Netflix, but have supplicated my need with plenty of his stand up specials. But THEN! the new season started. And I am in love with a different kind of Louis. Louie? Both. This season has included a gem, “So Did the Fat Lady”, which explores the weird double standard/prejudice against women who are overweight and how men treat them. JB can probably explain why and how this show is one of my favorites, but all I know is that I like it.

Louie’s biggest draw is the honesty of real life and the cynicism that comes with that honesty. It’s true and it’s real and that’s why it’s so funny. I find myself laughing less at the punch lines and more at the truly sad or awkward moments I can relate to in my own life.

Where Louie sets himself apart is, he presents it in a way that says, “Life sucks sometimes, it’s really tough. Your kids will make you angry, you will be lonely and you’ll never be happy with your own idea of yourself. So what. Laugh at it. Have fun with it. Be irreverent from time to time.”

In one of his early seasons there is a moment where he is riding in the car with his daughter to his ancient (and slightly racist) grandmother’s home. His daughter is in the back just sayings, “Daddy I’m bored,” over and over, in a toddler voice where bored sounds more like buwerd. After a whole 45 seconds of this, he stops the car and turns around and says:

While that is a pretty heavy-handed thing to say to a four-year-old, it’s a very important thing to say to his demographic audience and it’s SO FUNNY when he does it that you don’t realize he’s talking to you until later. He then proceeds to sing the entire song Who Are You while air-drumming in the car – that takes up another five minutes of the episode – while his daughters look at him like the crazy person he is.

The first three season are on Netflix and the newest airs each week on FX.

There was an error retrieving images from Instagram. An attempt will be remade in a few minutes.