Each Monday This American Life posts their new podcast online (the podcasts are recordings of their Saturday radio broadcast, sometimes with extras).

The podcast is mostly in the form of journalism and memoir but it’s about all kinds of topics and done over plucky music with a lovable cast of journalists-turned-narrators. Ira Glass is the host and he is absolutely lovable. Some stories are silly, some are sweet and some are really intense journalism.

Y’all. Many of you know of our unending love for This American Life, but this particular episode was one of our favorites. It seemed, on paper, something I wouldn’t be into – an opera and musical about everyday things like being trapped in a closet and undercover cops. Though its super classy and I’m sure I would love it if I looked into it more, I don’t really get opera. Most of the time it sounds weird, is in another language, and there’s no dialogue so you’re just guessing at what they mean by their facial expressions that are confused by their am-i-making-the-right-note-face. And I’m not a huge fan of musicals. Most of the time, I like them after experiencing them, but the idea of a musical doesn’t make me very excited. HSM, Seven Brides for Seven Brothers, Footloose…I love. Mamma Mia and the like I don’t.

But this episode! You must listen to it. Ira is hilarious, he brings on his cousin as a special guest (Philip Glass), and Mike Birbiglia makes an appearance. I have a special place in my heart for Mike. Mouse-achusetts and all. Listening to the “21 Chump Street” musical was SO GOOD, but also made me mad all over again at the undercover cop. 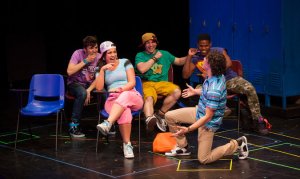 She was posing as a student in a rough high school to try and take down drug dealers, but ended up catching the eye of a straight-A student in his senior year, almost to college with a full-ride scholarship. She asked him to find her some pot, and because he loved her, he worked really hard to find her some. She insisted he take money for it, but he wanted to give it to her because he cared for her and wanted to do what she asked, not because he wanted pot or even knew how to sell it. He ended up getting arrested because there was money exchanged and it still makes me made at the female cop. The songs are very well written and the tunes are super catchy. You can download the video, music, and podcast all for just $5! Or just download the podcast for free. You won’t regret it.

Listen to the podcast, download and watch the video here

I was on board with this week’s episode as soon as it started. The first woman was an audio book narrator and opera singer who got trapped in her hotel close while trying to narrate an audio book. Since she sings opera and Ira’s brother writes operas they, of course, turned the small tragedy into a small, but hilarious, opera.

That was followed by 21 Chump Street, one of my favorite stories they’ve done. It’s about a high school kid who falls in love with a new girl in his class… but she’s an undercover cop looking for drug dealers. He doesn’t do drugs but he is smitten so when she asks where she can find some drugs, he helps her out, hoping to take her to prom. It doesn’t end well, but the musical rules.

This is one of my all time favorite episodes of This American Life to date.

The thing about This American Life is, they don’t let you listen to their old episodes for free, you can only download the most recently broadcast episode. You have until Sunday night to go download this one. It’s amazing.

Listen to the podcast, download and watch the video here